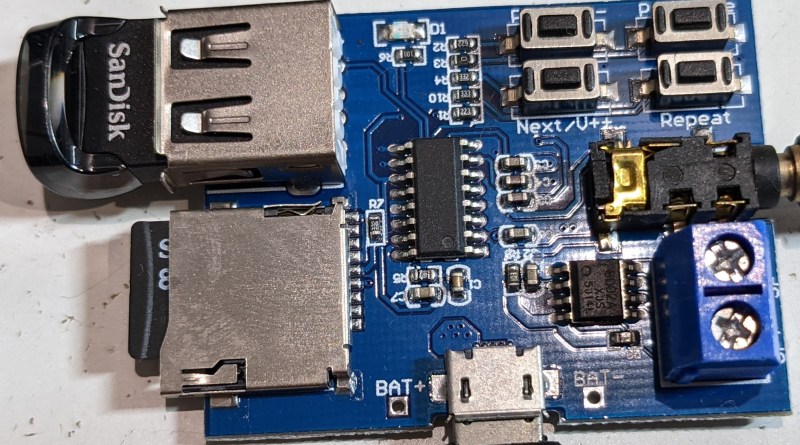 I purchased a mini USB/SD MP3 player module from AliExpress for a mere $4, shipping included, which arrived in great condition in less than two weeks: As the name suggests, the tiny 4.5cm x 3.5cm module supports MP3 playback from USB or SD card. It accepts 5VDC input from a micro-USB port and provides audio output either via a 3.5mm headphone socket or to a 8-ohm speaker, with the help of the onboard 8002A class A/B amplifier. The only other chip on the board is labelled “AB20CL5A5U 1-82″, which I cannot find any information whatsoever online. Given the functionality of the unit, I suspect the chip is probably an FPGA. The part number is probably in-house or simply randomized, which is not unusual for Chinese products.

For what it is, the module performs rather well. Up to 32GB FAT16/FAT32 USB thumb drives or SD cards are supported. NTFS is obviously not supported, and I hope you do not have to ask me why :). Audio output is great via the headphone socket and good enough via the speaker pins, although the volume is a bit soft for certain files. There are four buttons on the board whose functions are listed below:

There is only one single LED on the board which will flash to indicate that a track is being played. I would have liked the module more if it had another LED to indicate power status. There is no non-volatile memory on the board, so the last played track is not remembered and the first track of the SD card (default input) will be played after power is applied. When using headphones, current consumption is around 30-40mA if playing from SD card, or 90-100mA if playing from USB. It should be noted however that the USB controller on this board is not built with power consumption in mind. During my tests, current consumption is always high once a USB thumb drive is attached, even when playback is being done from SD card. With the thumb drive disconnected, current consumption will drop significantly. You can probably achieve lower USB power consumption using something like the CH376S, which has a working current of just 15mA and can be put to standby mode when not in use. Still, given the price I cannot complain too much as the module is working well and audio sounds great. That said, if you are planning to integrate this module into your battery-operated product, make sure to use a low current consumption USB device and disconnect it when not in use to extend battery life.

As with most Chinese products, the module is not built to last, so you might want to buy a few to keep as spares. There is no reverse polarity protection on the input and no short-circuit protection on the speaker output pins, so you risk damaging the board if you are not careful. I damaged one of mine by accidentally shorting the speaker pins – the damaged board no longer works and there is no audio output, although current consumption is still around 20mA.

The following video demonstrates the operation of this board:

See also my other article on the WTV020 module, which is much more limited and can only play certain types of WAV files from small SD cards.