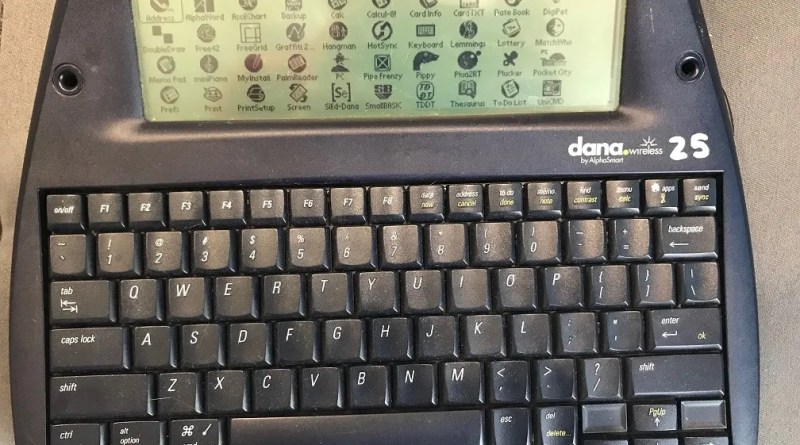 I love the idea of distraction-free writing, which allows me to focus on my thoughts without any of the modern distractions such Facebook or Youtube. This is why a few years back I explored the Brother Super PowerNote PN-8500MDSe, a vintage word processor,  just to see if it could be be useful as a modern typewriter. I found out however, after a few weeks of experimenting, that the lack of a more modern data transfer interface, besides the built-in serial port and floppy disk drive, discouraged me from using the PowerNote for anything other than experimenting. The machine was eventually sold to a Z80 programmer who promised to update me if he managed to run CP/M on it. Unfortunately, I never heard from the Z80 programmer again and the eventual fate of the device is not known.

With some free time recently, I resumed my quest for another typewriter which better suits my needs. After a quick Google search, I found FreeWrite, which is almost exactly what I wanted, but at a hefty sum of at least 500 USD, way above many hobbyists’ budget. I then turned to eBay and found the AlphaSmart Dana which runs on Palm OS 4.1. The device was manufactured around 2003 and two versions were released, one with 8MB of RAM without wireless capability and the other with 16MB of RAM with wireless capability. It comes with AlphaWord, a simple but sufficient word processor for most writing needs, together with a few basic apps such as calculator, calendar or to-do list. My unit has an inscription “25” written on the right side but is otherwise working well and in good physical condition: 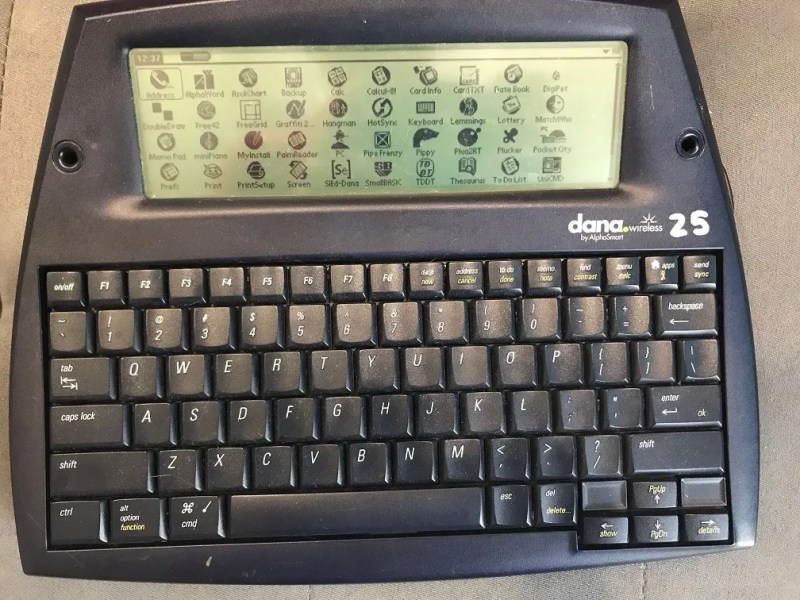 The Dana, unlike the Neo, has a backlight which can be enabled by holding the ON/OFF button. The backlight intensity is just enough, not too dark and not too bright, and helps increase the LCD readability in low lighting conditions. On the other hand, the Dana has no backup battery and the estimated running time when using the built-in 1600mAh pack is just around 20-25 hours. Palm devices of this era typically install apps onto volatile memory (e.g. RAM) and the device must remain powered, either via the main or backup battery, for data to be retained. The user manual suggests that data can still be kept for a couple of hours after the device refuses to power up due to low battery, but do not count on this. During my tests, I have seen the device switching off when the battery indicator still showed 20%. The Dana might also behave erratically when the battery voltage is low, so you should always make sure the battery is fully charged.

In my case, I quickly cut away the original dead rechargeable batteries from the pack but kept the connector and wired it to the holder originally meant for non-rechargeable batteries, and cut the wires that connect from the battery holder to the Dana’s motherboard. I then used 2800mAh Ni-MH batteries purchased from Amazon to extend the running time. The modification works well and the device can also be charged via the USB cable. Take note that you cannot just use rechargeable batteries without modification, otherwise the Dana will always think that battery is low and power off prematurely, as the holder is originally designed for alkaline cells whose nominal voltage (1.5V) is higher than Ni-MH cells (1.2V). The average charging time is around 8-10 hours. You might want to wait for a bit more after the right indicator light turns green before disconnecting the USB cable, otherwise the battery might be under-charged.

With this modification, you can no longer use normal batteries with the Dana. This is still acceptable because the Dana’s high current usage will consume a lot of alkaline AA batteries over time. Even the user manual suggests that alkaline batteries should only be used when a power source is not available to charge the device. And yes, the unit can run on USB power with no batteries inserted.

If you use the SD card to store your data, which is recommended to reduce the risk of losing your works due to a battery failure, take note that battery life might be reduced. The Dana only supports FAT12/FAT16 SD cards (not SDHC), which effectively means only SD cards smaller than 1GB will work. Some newer SD cards, despite being 1GB or less, support SDHC only and will not work with the Dana. Other SD cards will consume significant current even when idle and will drain the Dana battery significantly. If your Dana appears to eat batteries for breakfast, try to change the SD card, or remove the card when not in use.

The Dana supports printing to a suitable printer via the USB type A port. Printing can be done from the File menu for apps such as AlphaWord, but you can also print using PrintBoy: 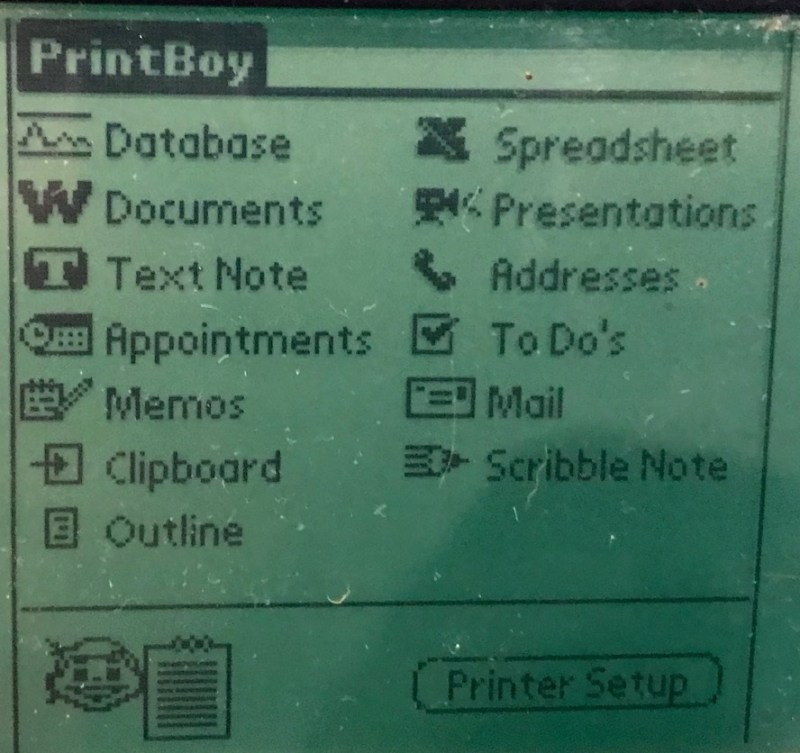 A few printer brands are supported, among which the default is HP Laserjet & Compatibles: 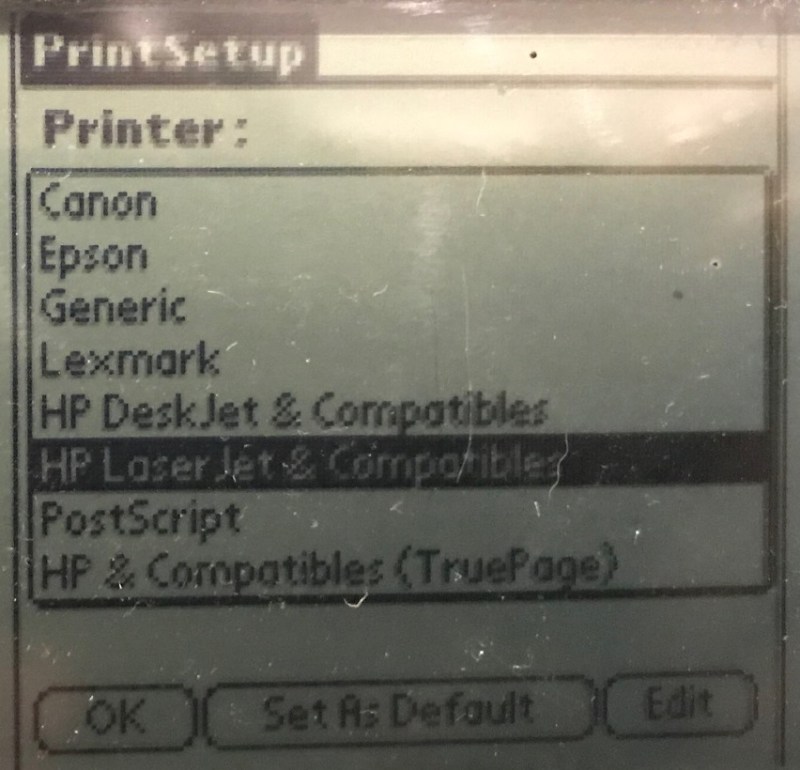 After selecting the brand, you can select a printer model. Although the list contains many popular printer models at the time, your best bet today is to select HP LaserJet & Compatible (or maybe Epson), pick any of the models, and make sure that your USB printer understand HP PCL or Epson escape codes,  Most office laser printers should be able to emulate the HP Laserjet just fine, at least for basic document formatting. If the output is corrupted, you can try to select PostScript and see if your printer understands it. If all fails, you can select generic, which results in the Dana sending only raw text to the printer, without any formatting.

One thing worth mentioning is that the printer needs to identify itself as having USB device class 07h (assigned to printers) for the Dana to even attempt printing. Certain cheap printers, e.g. a Chinese thermal printer purchased from eBay, simply register themselves as a serial device and rely on their Windows drivers to handle printing. Most low end inkjet printers also do not understand raw text, PCL, Epson escape codes or PostScript for printing and will not work on the Dana. Also, be careful of certain portable printers which may attempt to charge or power themselves via the USB port. The USB port on the Dana has very limited current capability (100mA or less I believe), and may be damaged if the USB peripheral attempts to draw excess current via the port. I have such a printer and fixed the issue by cutting the VCC line within the USB cable – the printer still works fine for printing through the Dana, just that it will not charge.

This is a printout from AlphaWord on my Brother laser printer, which demonstrates various capabilities of the word processor:

AlphaWord saves its document as a PDB file, which is actually in WordSmith format. To convert PDB to Rich Text Format (RTF) and vice versa, you need to use WSConv.exe, downloadable from the link at the end of this article. The RTF file can then be opened in any modern word processors. Despite this minor inconvenience, I found that AlphaWord, with its built-in spell-checker and thesaurus, serves the purpose very well. Without any modern distractions such as the Internet, I was able to write a few paragraphs using AlphaWord within a couple of minutes.

As the Dana runs on PalmOS, various Palm Apps can be installed on the device using Palm Desktop. If you are on 64-bit versions of Windows, a signed 64-bit driver is required, also downloadable from the link below. Do not use AlphaSmart Manager which requires the use of an Alpha hub. You can also install via MyInstall, which simply involves copying the PRC (or PDB file) to the MyInstall folder of the SD card and starting MyInstall. A backup solution such as Backup Buddy VFS Free is a must, else you risk losing all installed apps should your Dana run out of battery.

CardTXT and Sied-Dana are among the first apps that I tried on my Dana, which work very well. These are pure text editors which can replace AlphaWord if all you want is just typing text without any formatting. I also installed HotPaw Basic (yBasic), a BASIC interpreter which makes full use of the Dana screen size:

yBasic also has some support for the Palm OS user interface. For example, its INPUT function will popup a dialog box instead of showing a prompt in the console. You can also display an alert with an OK button using something MSGBOX(“HELLO”), which can be useful to build simple apps.

There is also SmallBasic, another BASIC interpreter which seems to be more stable but does not make use of the Dana screen size:

With the help of UniCMD, an orthodox file manager for Palm, I was able to display a 560×160 monochrome JPEG file on the Dana screen: 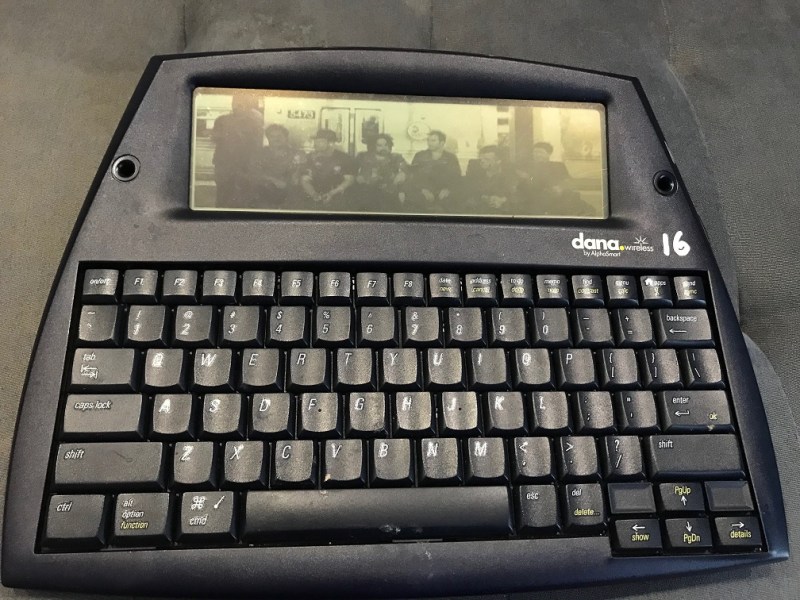 This is the original JPEG image:

I also found an app called TDDT which is an English-Vietnamese dictionary for Palm OS and works well on the Dana. The dictionary is quite fast, contains many uncommon words and is proof that custom Vietnamese fonts can be installed on Palm OS 4; 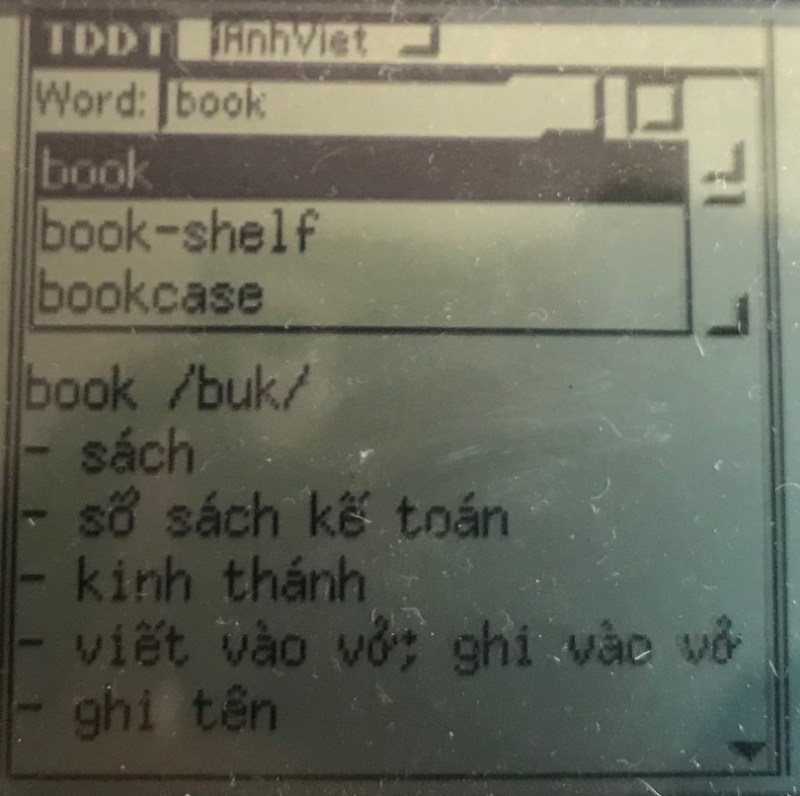 Unfortunately I could not find any apps that can help me type Vietnamese on this machine. The closest I can find is VN Keyboard v1.07 which can be installed but does not work properly. Pressing bb to activate the Vietnamese keyboard or tt to deactivate does not seem to do anything and I suspect the app is not even running in the background. There used to be many Vietnamese keyboards for Palm OS 4 such as Viettap, Vntype or PalmsKey, none of which can be downloaded today. I also found a link to “VietTap Setup.prc” which timed out despite repeated attempts. Many other links point to vietpalm.com, a now-defunct Palm OS community forum, and result in a 404 because the content is no longer available.  I therefore decided to give up on the search and type using VIQR, which represents Vietnamese accented characters using ASCII symbols and can be easily converted to Unicode once the document has been transferred to the PC.

All things considered, the AlphaSmart Dana suits my writing needs rather well. Despite its limited battery life, I am happy as can install a wide variety of Palm OS apps on the Dana, unlike the AlphaSmart Neo, for which virtually no useful third-party apps exist. Still, I will go ahead and purchase the AlphaSmart Neo just for comparison. The Neo has a 700-hour battery life, which can be very useful for those who are serious about writing while on the go.

You can download a ZIP file containing AlphaSmart Manager, Palm Desktop, 64-bit drivers for Windows, PDB-RTF converter and some of the apps mentioned in this article at this link.