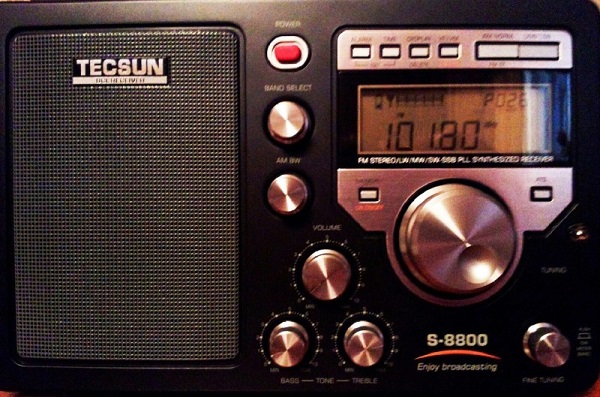 The Tecsun S-8800 can be said to be one of the best multiband portable radios ever made. It supports longwave, mediumwave, FM as well as shortwave with USB/LSB and even comes with a remote control. My unit was purchased from anon-co and arrived within one week:

Much has been said about this radio, including the superb shortwave reception so I will not repeat the same thing here. My unit is no exception, with very sensitive shortwave reception as well as excellent FM and AM audio quality. You should still try to set the correct FM de-emphasis (either 50μs or 75μs) for your area by pressing and holding digit 5 on the remote control. Other hidden undocumented features can be found here. I also enabled longwave, set AM spacing to 9kHz as well as configuring the FM band to start at 64MHz for my unit.

Overall the S-8800 is a very good receiver, albeit with some quirks. Using 10kHz AM step the auto-tuning still does not stop at 610kHz, a strong AM station near me which appears to use 10kHz AM spacing, unlike most other Asian countries. The audio is clear when tuned manually to that station. On the Tecsun PL-360, auto-tuning does not stop at that station either and the S/N display shows a perfect zero when tuned manually to the same frequency, which seems to indicate some odd problem with the signal-to-noise ratio calculation method employed by Tecsun. My other radios have no issues detecting this station in auto-tuning mode.

There is a high pitch tone at 782kHz and 783kHz which covers another strong station and I have to tune to 784kHz where the audio is still clear to listen to the same station. This is known as birdie, aka internally generated noises, which is a common issue with digital radio. Fortunately, I did not find any other such frequencies on my unit, on longwave, mediumwave or shortwave bands. Tuning the entire band is smooth and pleasant, as there is no muting when switching between frequencies, unlike the Sangean PR-D3.

Longwave reception is also good. Oddly, the radio likes to beep when each remote control key is pressed if LW frequency is smaller than 400kHz. Sometimes the radio picks up spurious IR and randomly tunes backward or forward. This issue is more obvious when the battery is almost empty and seldom happens when battery is full.

As noted on various sources, the antenna switch does not disable the internal ferrite antenna and might be a problem for some users. The supplied pair of 2000mAh 18650 Li-ion batteries is unprotected and will provide around 25 hours of listening at average volume. The radio would not work on DC alone without batteries, unlike many radios. I wish Tecsun had decided to use the more common D cells for this radio. I have always been very skeptical of loose 18650 cells that can easily explode if shorted or overcharged. Luckily, the charging circuit is well-built and monitors the voltage of each battery individually. A full charge takes approximately 6 hours on my micro-USB charger.

The only other thing I do not like about this radio is the volume control. The mechanical knob on the radio serves as the master volume control and has to be set to a reasonable level for the volume buttons on the remote controls to be useful. Bass and treble level cannot be set from the remote control. AM reception is pretty sensitive but is somehow slightly noisier and obviously no match for the Sangean PR-D3. Still, I am happy with this radio and have been using it for at least an hour daily every day since the purchase, mostly for FM and shortwave listening. If you want to purchase one, visit anon-co’s eBay store.