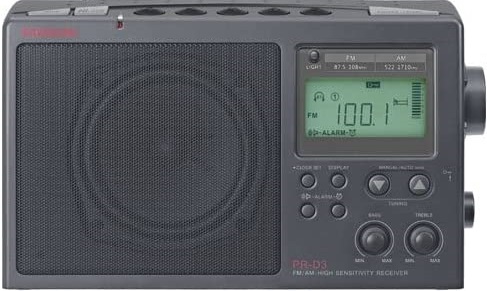 There are no AM radio stations within a 300km radius from my location so on an average radio I can only hear static on the AM band during the daytime. After around 7pm until 7am, depending on the weather, however, distant AM signals can often be heard, albeit with noises, on most of my radios. In order to be able to listen to AM stations with better audio quality and during the daytime as well if possible, I have long wanted to own a CCRadio 2E AM/FM radio, which has a 200mm twin coil ferrite antenna and ranks at the top of the AM radio shootout list by Jay Allen, in terms of both AM sensitivity and selectivity. The radio is available on Amazon US but most non-US radio hobbyists would think twice before purchasing as the device is clearly built for the US with 10kHz AM spacing and 110V AC input. The device also has support for the VHF ham band (144 – 148 MHz) and weather band (162 MHz), both of which useless outside US.

Recently I came across ryda.com, an Australia electronics retailer that sells the Sangean PR-D3 as a long-range AM/FM radio. This radio is meant for the Australia market, with 9kHz AM spacing, 220V AC input but without the VHF or weather bands and should work well for most part of Asia. The PR-D3 design looks identical to the CC2E and both can be considered to be the same radio, at least as far as AM/FM reception is concerned. As Ryda only ships locally, I used a third party forwarding service and the radio arrived within three weeks in great condition. The net amount, with the forwarding cost added, is still lower then the price of the CC2E on Amazon. 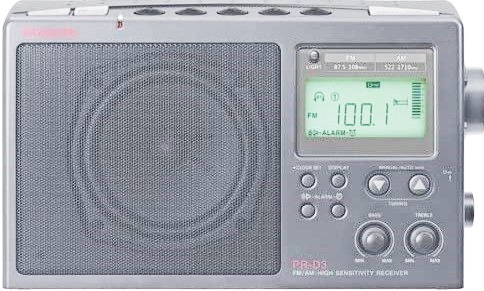 A quick test at 11am showed that the PR-D3 really lives up to its reputation as one of the most sensitive AM radios ever built. Instead of hearing static, I could now hear very soft but intelligible voices on various stations as far as 500km reading local news! For comparison, only static could be heard on my other radios, including the Tecsun S-8800. At around 5pm, the audio became clearer, albeit with noise, on the PR-D3 but was still almost unintelligible on the S-8000. When the evening came, audio on both radios became clear, but still the S-8800 seemed to be noisier than the PR-D3, which managed to play crisp audio even on some distant stations. FM reception is perfect too, although I feel that the whip antenna should have been longer for better reception of weak signals. When switching between frequencies, the audio will be muted for up to 5 seconds, especially on the AM band, which is annoying but not too much of an issue for me since I usually know the exact station frequency to listen to. With a suitable AM loop antenna such as the Tecsun AN200, daytime reception can be further improved, to the point of being enjoyable! From that day on, the PR-D3 becomes my main AM/FM radio and the S-8800 is only used mainly for shortwave listening.

You can configure 5 frequency presets on this radio for each frequency band, which is rather limited in my opinion, given the strong AM reception. The AM frequency range is between 522-1710kHz covering the extended AM band, contrary to the information provided on Ryda which shows that the maximum AM frequency is only 1629kHz. The default AM spacing of 9kHz cannot be switched, unlike some later Sangean models, but with fine-tuning in 1kHz step, I can reach any frequency. This is needed because a strong station near my location, despite being in Asia, still broadcasts at 610kHz. The addition of a time display and alarm clock is a bonus, even though I feel the second display is rather annoying. It would have been more appropriate to just show the hour and minute, like most other radios with an integrated clock. FM stereo reception is supported via headphones but can be disabled by pressing the FM MONO button to improve reception or weak signals. The same button can also be used to switch the AM bandwidth from wide (approximately 4kHz) to narrow (approximately 2kHz) to reduce interference.

During my tests, four newly bought D-cells which measured at 1.65V on my multimeter only showed as half full on the PR-D3 battery indicator. This does not mean that my batteries are bad but is rather just how the meter behaves. On my unit, the indicator will not decrease further until after the battery has depleted significantly. The user manual for the PR-D3L, a similar model with longwave support but no stereo sound, listed the battery power consumption at 450 mA, which I believe is the maximum consumption and not the average power consumption. The manual for the CC2E listed an average consumption of 40-50mA, which translates to up to 360 hours of usage for high performance 18000mAh alkaline D-cells. For comparison, the manual for PR-D14, another similar model also running on 4 x UM-1 cells with USB playback, shows an average runtime of around 170 hours for 4 hours daily at average volume. The manual for PR-D15, a similar model with stereo speakers running on 4 x UM-2 (C cells), listed a battery life of approximately 70 hours. All these figures are obviously approximate as the actual battery life varies depending on types of batteries and usage patterns. From experience I believe the battery life of the PR-D3 is at least 200 hours when used at average volume for a few hours daily on typical D cells. When the individual battery cell voltage reaches 1.1V, you will not be able to turn on the radio until the batteries are replaced, although certain actions such as setting clock or alarm might still work. Replacing the batteries will also clear the station presets, which are stored in volatile memory.

Unlike the CC2E, my PR-D3 does not have the line-in jack. There are two unmarked terminals for an external AM antenna, with the one closer to the edge being ground. There is also no way to disable the internal ferrite rod once an external antenna is connected. The procedure to align the twin coil on the PR-D3 is almost identical to the CC2E, with the only difference being that the DISPLAY button is used instead of the CLOCK button.  The steps to do so are not described on the PR-D3 manual, only on the CC2E manual:

Another thing worth mentioning is that the AGC might cause significant volume changes as signal strength varies. On the S-8800, if the signal strength decreases, you will hear an increase in noises and audio will become less intelligible. On the PR-D3, the entire volume level will decrease, as if to mask the increased noise level, and you will have to increase the volume manually if the audio becomes too soft. This issue does not affect me that much, if at all, and I still love the very sensitive AM reception of this radio.