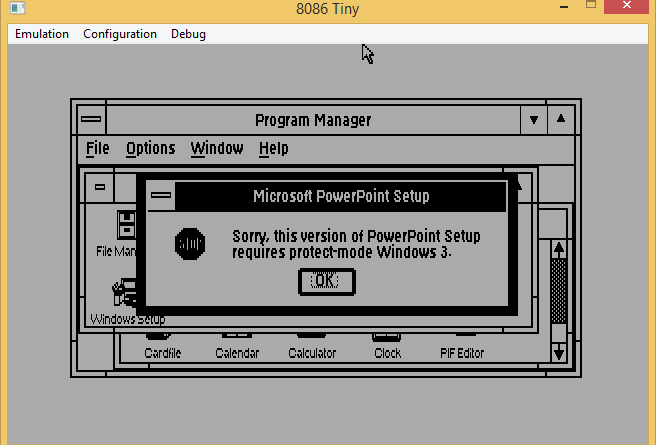 DosBox has always been my favorite emulator to experiment with vintage PC software, but I still love the idea of having a standalone PC XT-compatible emulator to conveniently play with XT software without having to switch between different DosBox configurations. Before Windows 7, my tool for such usage had always been PicoXT, an lightweight emulator that supports CGA/VGA graphics as well as dual floppy drive and dual hard drive configuration: 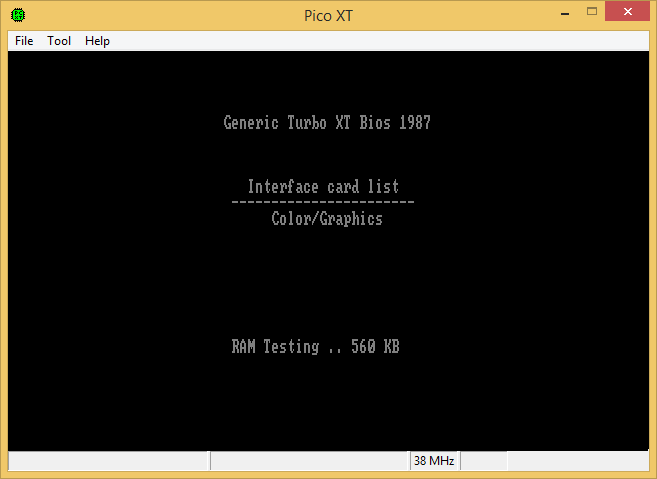 Nowadays, although PicoXT still works on Windows 8, the emulator is no longer convenient to use as the software continuously emits static sounds as the machine is booting up and I need to look for a replacement. After a quick search, I found 8086 Tiny Plus, an open source XT emulator with floppy, hard drive, PC speaker and CGA support, which ran well on my Windows 8 machine with no static background sound, unlike PicoXT: 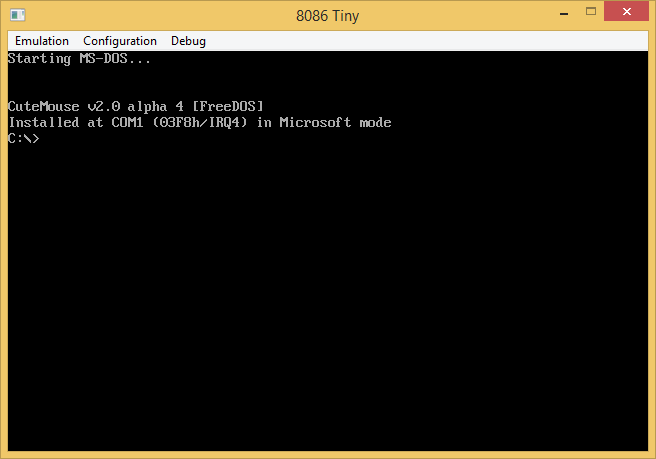 Two Windows versions of the emulator are available, for SDL and for Windows API. Both have almost the same functionality but the SDL version contains an option to switch between CGA and VGA font, that is not available in the Windows API version: 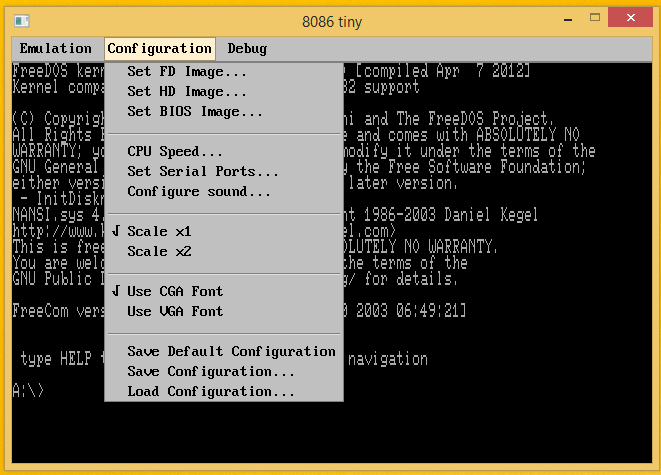 Configuration of the emulator is done via default.cfg config file, which looks like the following:

Much like DosBox, there is also a console window that will output any error messages: 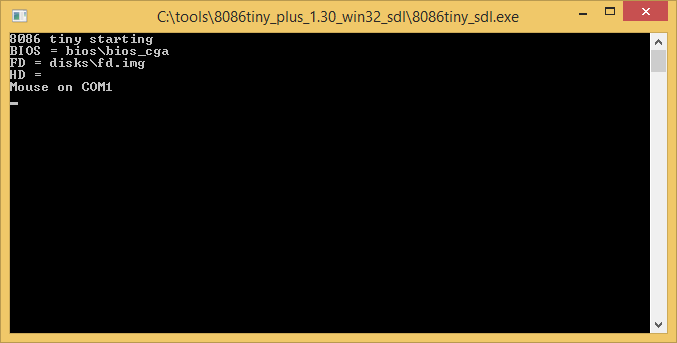 There are no checks for basic configuration mistakes such as non-existent disk images, so if you see cryptic error messages in the console, make sure that the path to your floppy and hard disk images is correct.

Under CheckIt, the emulator appears as a 8088 XT Machine with 640KB of RAM, MCGA adapter with no math coprocessor: 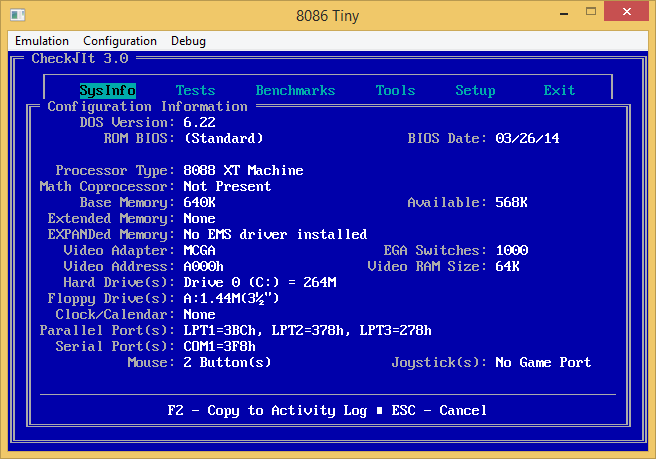 Most DOS games like AlleyCat work well on this emulator: 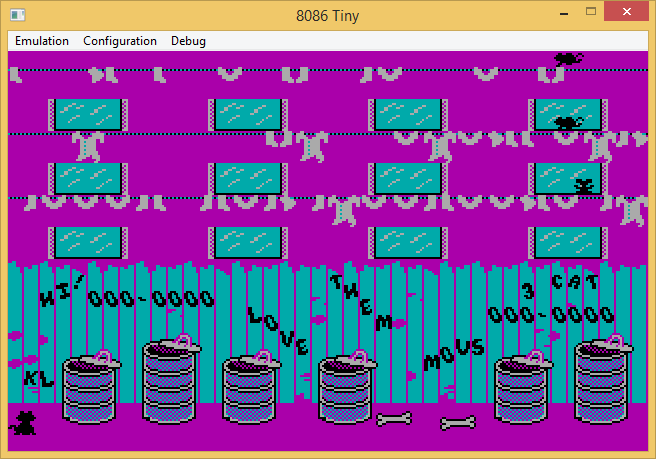 Prince of Persia also plays well in MCGA mode (320x200x256), which is also the highest resolution it can support: 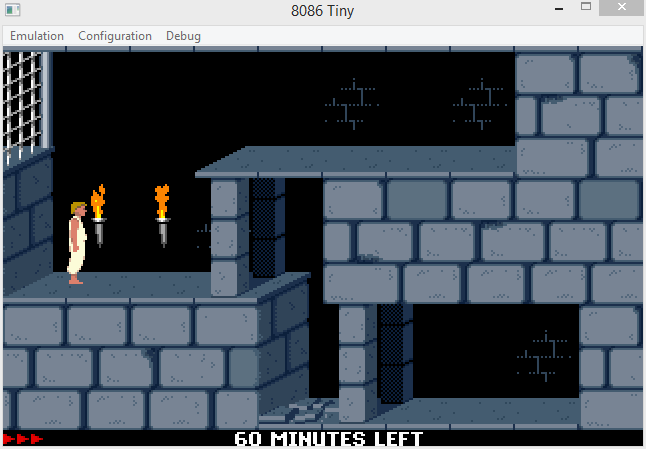 Although the emulator boots up from floppy just fine, it refuses to boot up from hard drive. When I attempted this, the emulator complained about “80286+ only op code” and “8087 coprocessor instruction” in the console: 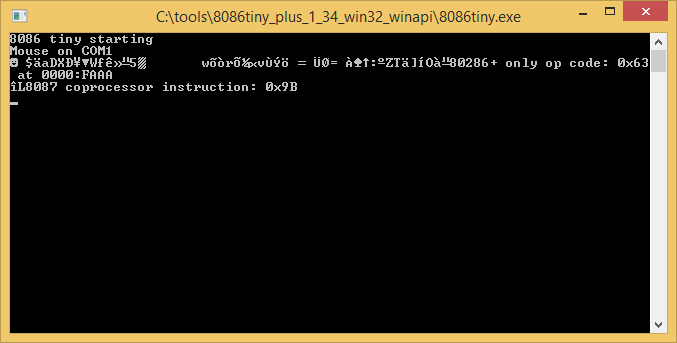 The hard drive has been partition properly with FDISK, its MBR written and its only partition marked active and SYS command has also been used to set up MS-DOS 6.22 on the active partition. The error happened even with the sample 40MB disk image provided by the author, so I suspect that this is simply a bug with the emulator. Nevertheless, accessing the hard drive after booting up from floppy has no issues and Windows 3.0 runs just fine in real mode with the VGA monochrome display driver: 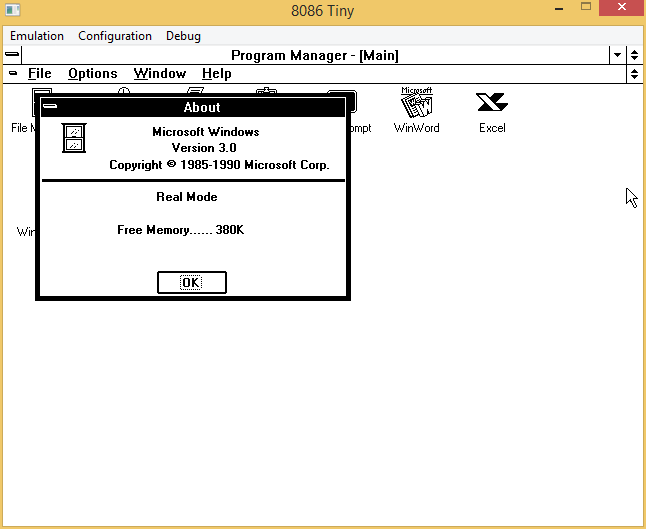 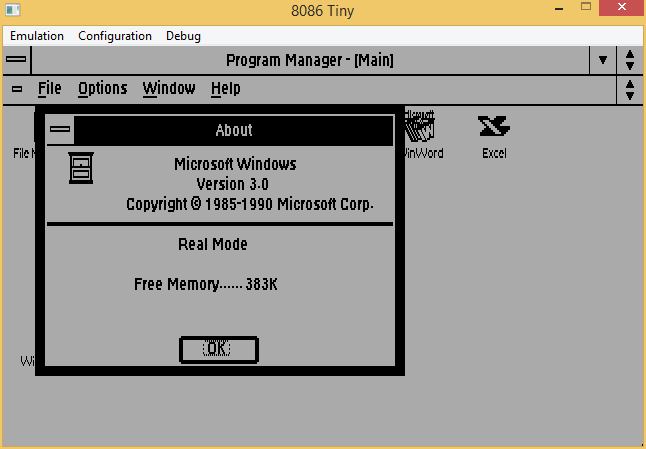 Unfortunately, Windows 3.0 does not have color CGA driver and we can only use Windows in monochrome! Even then, Word 1.0 works well with CGA: 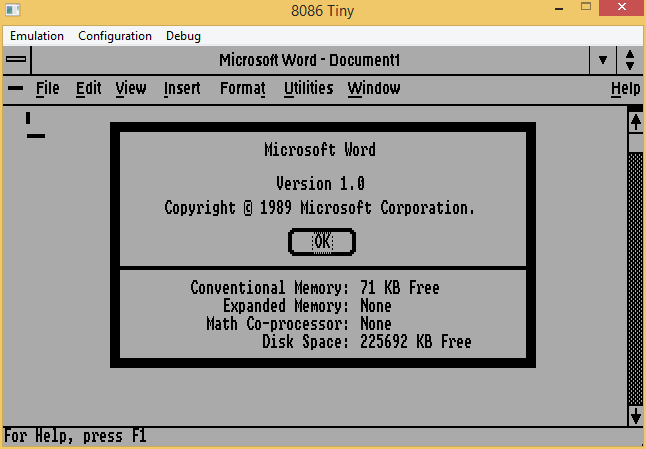 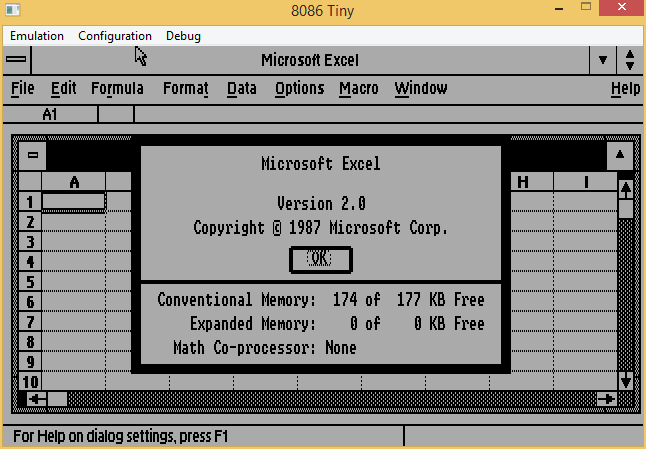 As for PowerPoint, we are out of luck. Even the oldest version of PowerPoint for Windows requires protected mode: 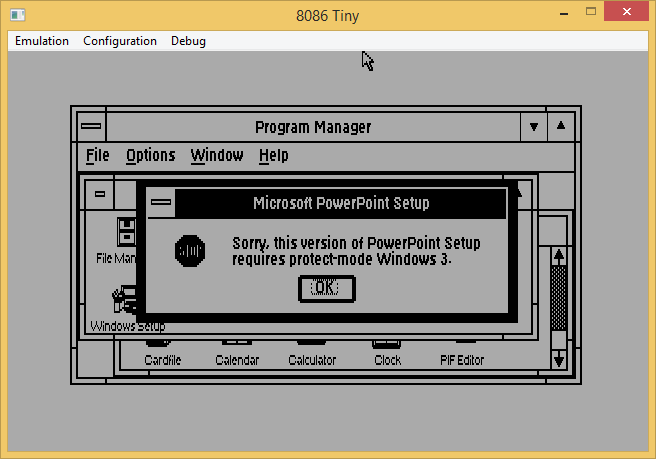 There are also some issues with the serial mouse emulation. In my tests, Microsoft mouse driver simply crashed and showed random characters but CuteMouse was unaffected and could still run properly: 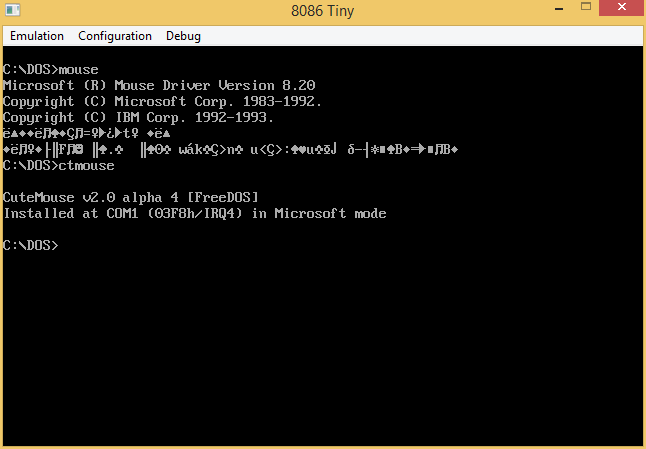 Because interrupt 10h with AX=1100h for setting custom video fonts requires at least an EGA card and does not work on CGA, when using Norton Utilities, dialog boxes and mouse cursor will be displayed using default font: 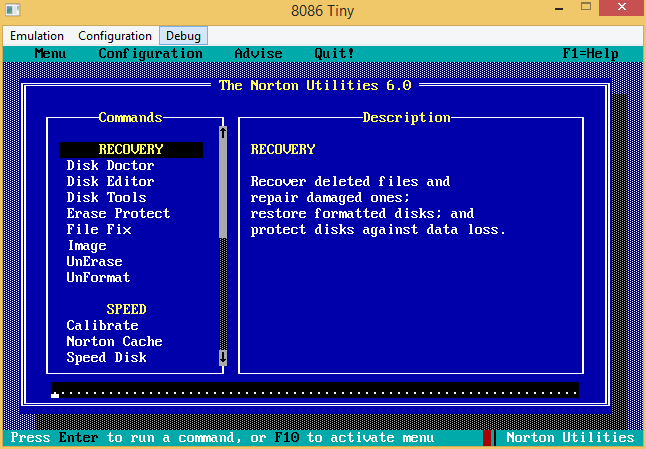 The actual user interface would have looked like this on a VGA/EGA machine: 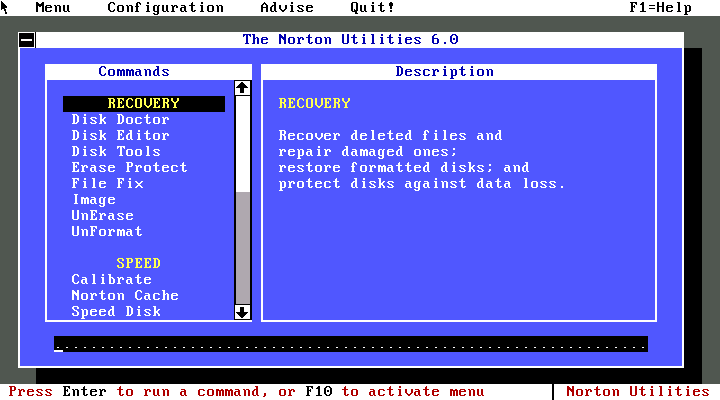 Regardless of these minor issues, 8086 Tiny Plus appears to be quite stable in my tests. Unlike DOSBox SVN-Daum by ykhwong, I did not experience any other abnormalities in the video display emulation and most of my XT software were able to run properly. My conclusion is that 8086 Tiny Plus can be a good alternative to DosBox especially for those who just want a simple click-and-run XT emulator without having to go through the hassle of tweaking various configuration entries. It will be good if the emulator can provide some Adlib support, but that is probably not important since I can always use DosBox for that