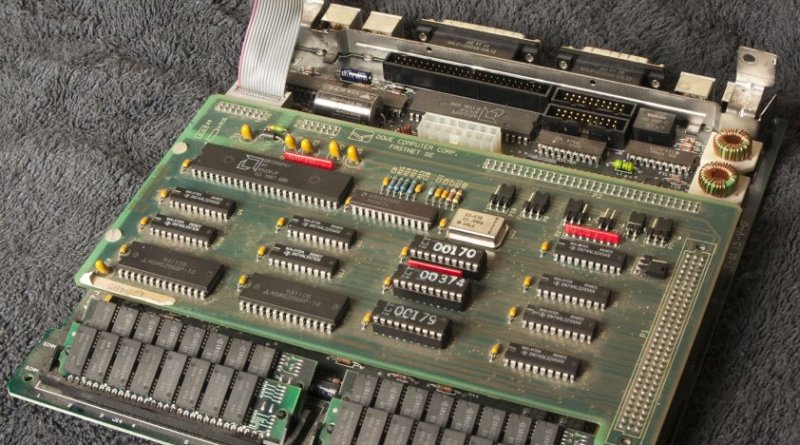 This is a photo of the Dove Fastnet processor board that is connected to a Macintosh SE motherboard: 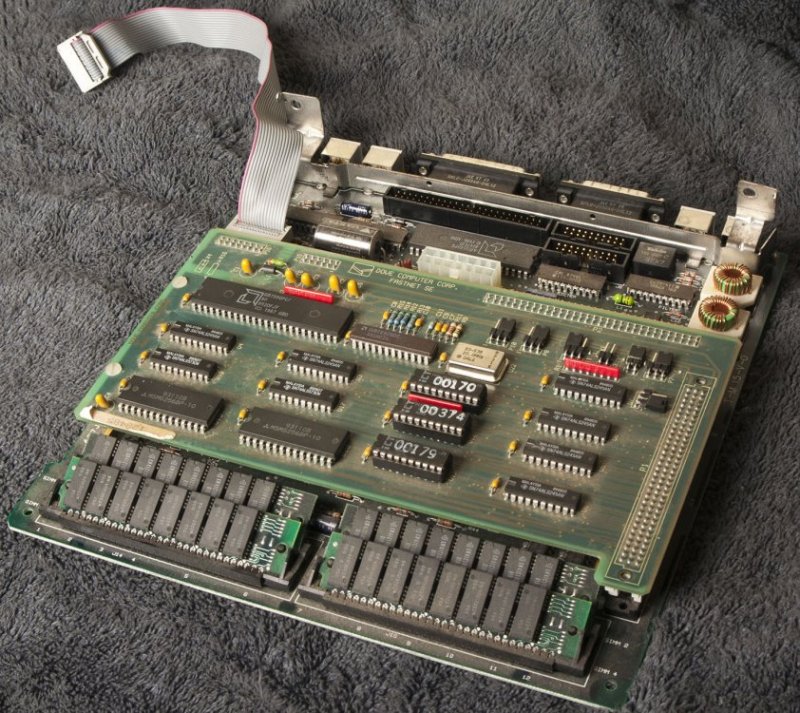 This is a photo of the connector board with the ports: Unfortunately, all my attempts to get the card to work on a Macintosh SE failed. Simply put, there was no driver available anywhere on the Internet for this card! From my research, the card was manufactured by Dove Computer Corporation whose main business was network/telecommunication equipments and belonged to a family of similar NIC cards for 68k Macintoshes. The FastNet SEn is for the Mac SE whereas the FastNet SE/30s is for the SE/30. The manufacturer (Dove) is no longer in business, but a text file that describes the company’s range of products can be found on archive.org.

The only file I found that has anything to do with this card is DoveEthernetkaart.sit which is for the SE/30 version of the card downloaded from the Mac Driver Museum. However, the file seems to be corrupted and can’t be opened with any version of StuffIt Expander. There was a thread on 68kmla where somebody encountered exactly the same issue, with no replies. The same DoveEthernetkaart.sit file found on other mirrors is also corrupted! What’s more, the archive CD for Mac Driver’s Museum found here also contains the same corrupted file! At this point, it seems like I am going down the rabbit hole searching for the driver for this card by the file name …

I found an old Usenet discussion here which mentions dove-fastnet-3-amd.hqx (or Dove FastNetIII.800K.sit.hqx) and dove-fastnet-3n-nat.hqx (or Dove FastNetIIIn.800K.sit.hqx) being the drivers for the FastNET III cards with the AMD and National chipsets respectively, but these files cannot be found anywhere online. At one point (around May 1993) these files were posted to the newsgroup com.sys.mac.digest and available on the InfoMac archive. The current archive does not contain these files, nor does the 1994 CD-ROM release of the archive. From what I found out, the files were posted to comm/net in the archive, which was probably renamed to comm/inet later, with many files deleted or moved elsewhere. The same Usenet discussion also contains a reply from a Dove support personnel on 9 Jan 1993 saying that drivers for other Dove products were also available on their BBS as well as AppleLink.

Although these files were apparently uploaded as binaries to Usenet, my attempts to download them have failed. Most Usenet archive sites nowadays, even Google Groups, only provide text content for older posts and do not keep binary files. I also registered for an account on Giganews, but their 2000-day retention period is obviously not long enough for me to retrieve vintage contents dated back to 1993. Despite this, I still think that these files still exist somewhere on the web but are simply buried deep under some Usenet provider’s archive servers and have yet to be made public. Maybe a thorough search on the deep web could reveal them. Or perhaps one day someone will be able locate a long-forgotten floppy disk with these files and upload them. Only time will tell …

If it helps, when playing with the card, I noticed something really odd. Since the card does not have an RJ45 port, I used a Cisco MAU to convert the built in AUI port to RJ45 and realized that the power LED on the MAU did not lit up! After checking that all connections were secured, I realized that the ribbon cable between the NIC processor board and the connector board might have been connected in reverse. Pin 1 of the connector on the processor board (indicated by the red stripe) does not go to pin 1 of the connector on the NIC board, but instead goes to the other end. This is perhaps the reason why the Cisco MAU power LED did not lit up since it was not receiving power as the cable was wrongly connected. The cable is keyed from factory so it would only fit in one way. What makes this strange is that another member on 68kmla forum with the same card also had the same observation. The only logical explanation would be that Dove used the same set of cable for multiple products, changed the keyed pin (which was just a small piece of plastic) and did not bother to check that the keyed cable actually matched the PCB printout as well as pin 1 red stripe on the ribbon, which sounds unlikely.

I did not dare to reverse the cable to verify whether it was indeed keyed incorrectly, fearing I may destroy my motherboard. I simply disconnected the card from my SE and threw it into my junkbox. Maybe one day someone will be able to verify whether the cable was indeed keyed wrongly, and if yes, whether the card would work with Apple’s standard NIC driver should the cable be reversed. The fact that the Cisco MAU’s power LED did not lit up was an indicator that the connector board was not receiving power, which could really be because the cable was connected in reverse.

A copy of the Usenet discussion mentioned above can be found here for those who are interested.