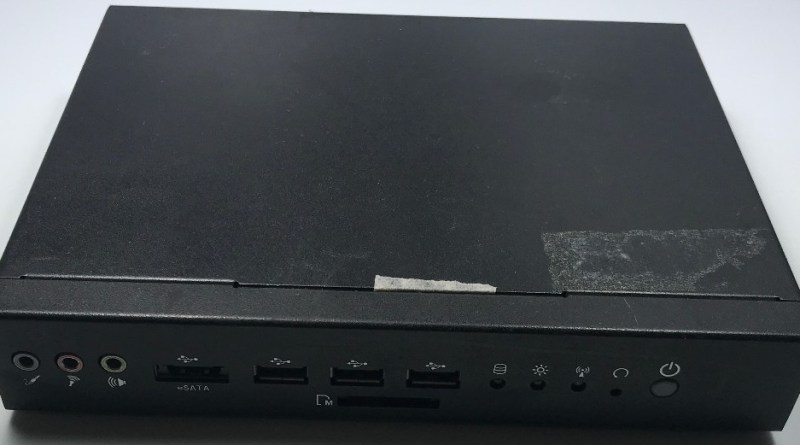 In my quest for a small form factor 64-bit machine to be used as a home server, I came across the QDSP-2050, a mini desktop PC made by Quanmax that runs on a 2.13 GHz Intel Pentium P6200 CPU using H55 chipset and supports 2.5″ SATA hard disks. The front panel has connectors for USB & eSata ports, line in/headset jacks, as well as a 3-in-one card reader: 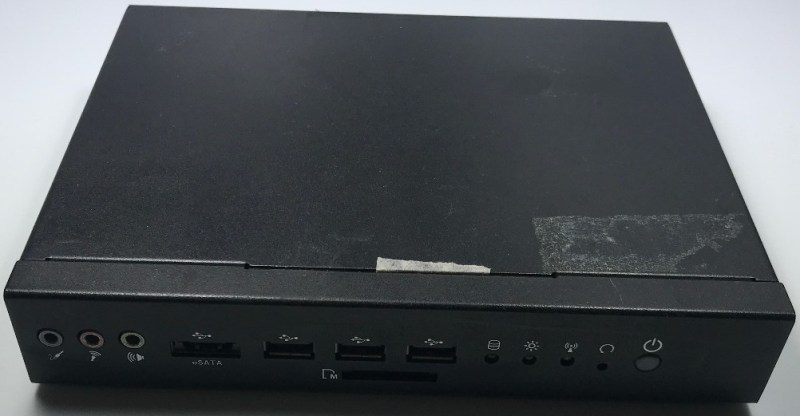 The back panel provides HDMI/DVI, Ethernet, USB, SPDIF ports and interestingly, a serial port. The following photo shows the back panel with the wireless antenna removed:

A sticker at the bottom of the machine says that the machine accepts 19V DC input @ 3.95A. However, the adapter that comes with my unit provides only 12V. The user manual, on page 2, also indicates that the unit accepts 12V. My unit works fine with the 12V DC adapter, so I guess there was some misprint on the bottom sticker:

The motherboard has a single connector (data + power) and enough empty space to connect a 2.5 SATA hard disk drive. My unit comes with a small 32GB SSD module that is nicely fitted to a 2.5″ SATA drive caddy: 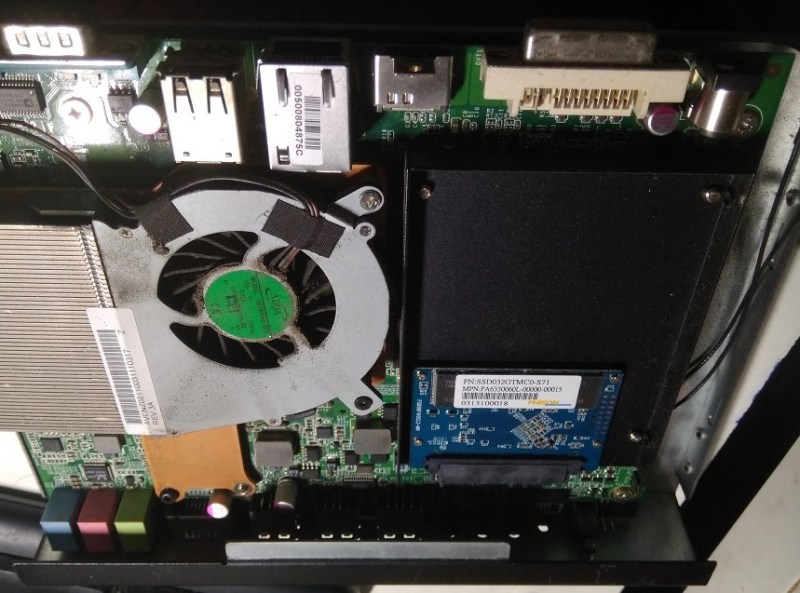 Unlike the BIS-6620 and the FX160, the CPU on this unit comes with a fan. The usage of a fan is needed probably because Intel Pentium processors tend to consume more power and generate more heat, compared with Intel Atom processors. As can be seen, my fan is dusty because the machine had been in use for a while before I purchased it.  The motherboard accepts up to 8GB DDR3 RAM, connected via two SO-DIMM slots located at the bottom of the motherboard and not shown in the above photo.

Installing Windows Server 2012 on this machine was a breeze. As expected, this server edition of Window does not have drivers for Intel HD Graphics (VEN_8086&DEV_0046) and uses the default Microsoft Basic Display Adapter driver instead. However, the drivers for Windows 8.1 64 bit work just fine. The only disadvantage is that, with this driver, HDMI audio output devices does not show up in Device Manager and playing audio via HDMI is not an option. I also cannot get the card reader to work – an empty disk drive shows up in Explorer, but Windows does not seem to detect any SD cards inserted.

The following screenshot shows CPUID output on a 64-bit installation of Windows Server 2012 on the QDSP-2050:

When I tried with Windows 10, all devices (Ethernet, sound, wireless, graphics) were automatically detected with correct drivers installed. So I guess Windows 10 is a better choice for this machine if you intend to use it for home file sharing and multimedia playback.

I measured the power consumption of this machine when running Windows Server 2012 with 4GB of RAM and 80GB SATA hard drive with no wireless card. The result was around 25W-30W. This seems to be much higher than the FX160 (around 15-20W) and the BIS-6620 (5W), which can be attributed to the Intel Pentium P6200 processor that runs at a higher speed of 2.13GHz as well as the integrated CPU fan. That said, the QDSP-2050 is still not a bad choice for a home server, especially since it can run in 64-bit mode. After all, it’s hard to find a cheap small form factor 64-bit Windows PC, as most of the popular solutions in the market are ARM-based and can only run Linux.

The user manual for the QDSP-2050 can be downloaded here.