This is the front photo of the FX160, showing the audio and USB ports:

This is the back photo, with VGA/DVI ports and external Wifi antenna: 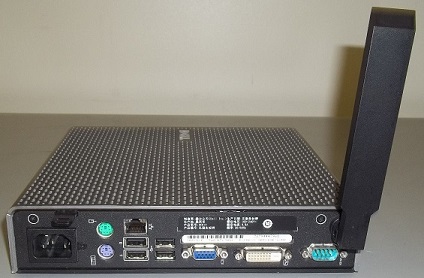 The motherboard has a single DDR2 RAM slot, supporting up to 4GB of RAM. The integrated Wifi card is connected via a PCIe slot. Near the hear sink is a SATA slot (highlighted in red) for connecting SATA hard drives. The CMOS battery (a normal CR2032) is highlighted in yellow: Although there is enough space inside the case to put a normal 2.5″ SATA hard drive, you will need a suitable caddy to properly connect such a drive. Not wanting to spend too much on this machine, I ended up using small pieces of wires to secure the hard disk via the small holes on the top metal cover, making sure that the case does not cover the “Do Not Cover This Hole” on the hard drive: Once closed and assembled, the hard disk can be seen through the case and works just great: Installing Ubuntu 17.10 on this PC was a breeze, contrary to my experience with installing Windows on the BIS-6620. The only inconvenience is that, although Ubuntu automatically installed the correct drivers for the integrated Ethernet and audio controllers, none were installed for the graphics and Wifi cards. To install drivers for the Wifi card, connect the machine to the network via Ethernet and run the following commands:

The second and third commands may not be needed, depending on the specific Ubuntu distribution. When done, reboot the machine. After that, Ubuntu should automatically detect the Wifi card and prompt you to connect to nearby networks.

Getting the correct drivers for the graphics card is a bit more tricky. The FX160 uses the SiS 671 chipset, which does not have any built-in Ubuntu drivers. Hence, the default VGA driver was used after installation with a low resolution of 640×480. Although it used to be possible in Ubuntu 12.04 to get up to get 1280×800 resolution with this chipset, support for the obsolete SiS chipset has been removed in recent version of Ubuntu. With Ubuntu 17.10, the best we can do is to use force X.Org’s VESA driver on this graphics card, resulting in a slightly higher 1024×768 resolution.

To do this, edit (or create if needed) /usr/share/X11/xorg.conf.d/use-vesa.conf and add the following lines:

After that, reboot the machine and Ubuntu should run correctly with 1024×768 resolution.

Finally, as my intention when buying this machine was to run it as a home Linux server, I used a portable power meter from Amazon to measure how much power the FX160 consumes, assuming average usage. The result is anything between 15-20W, depending on CPU load, whether Wifi is enabled, and various other factors:

This is a much higher figure compared with only 5W average power consumption of the BIS-6620. I attribute the different to usage of the 2.5″ SATA hard drive (the BIS-6620 ran on a CF card) and higher CPU speed (1.6GHz  for the FX160 vs 1.1GHz for the BIS-6620). Estimating the power consumption of cheap SATA hard drives to be around 8W, I would expect the machine to draw only 10-12W when running on SSD, which is not bad given the FX160’s high CPU speed. What’s more, since the FX160 supports up to 4GB of RAM, compared with only 2GB for the BIS-6620, I would say the FX160 makes a better candidate for a home server, after taking all factors into consideration.