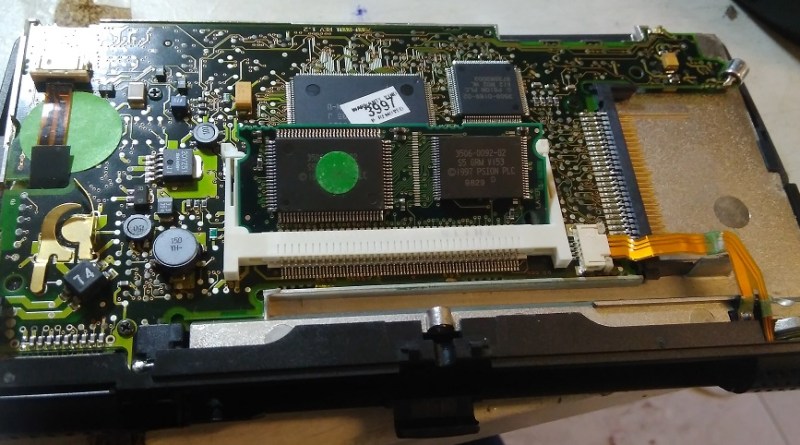 I finally managed to locate my long-forgotten Psion Series 5 from my store room today. However, to my disappointment, the LCD has been cracked, although the original leather case is still intact: The machine still seemed to boot up fine, as I could hear the POST beep and see some kind of text on the display. There is no display output port on this ancient device and repairing the LCD is also out of the question. So what can I do to make use of this device, besides tapping the LCD lines on a logic analyzer and try to make sense of the data?

Luckily I have another Psion Series 5 of the exact same model that is still working fine, but its keyboard and interface is in German: I played with this machine quite some time ago and found no method from the user interface to change its language to English. Most likely the operation system on ROM is the German version. Now that my English Psion PDA is broken, it’s time to try to change the language again, probably by swapping the ROM with the other English device.

Disassembling the Psion is an easy task. Use the two levers on each side that reveal the sockets for the CR2032 battery and CF card:

Loosen a few screws and the back cover should come out easily, showing the motherboard:

Here comes what I was looking for – a custom SIMM socket with what is presumably the ROM containing the operating system. After swapping the modules, lo and behold, the Psion booted up just fine to the English user interface, although the keyboard was obviously still in German: After carefully swapping the function key stickers as well as the keys on the keyboard between the English and the German versions, I now have a working English version of the Psion Series 5 PDA! The German version, now with a broken LCD, is back to the store room, perhaps to be looked at again on another day to see if there is a way to replace the built-in LCD with some cheap eBay LCD modules, and if it is possible to dump the contents of the 72-pin ROM module.