I came across a Multi Evolution 500 SCSI controller expansion card on eBay, which was described by the seller as faulty since the card did not seem to detect his SCSI hard drive and simply reported either SCSI Read, SCSI Status or SCSI Timeout for all the available SCSI IDs: Knowing that the unit couldn’t just be faulty as electronic devices of this age (circa 1994) were built to very high quality standards and literally like tanks, that is to last for decades, I decided to purchase the item for my experiments. The item arrived a few weeks later from Germany in good physical conditions. The front with the LED indicator, the side expansion socket, and the SCSI port also look clean, with no metal rust or things like that: 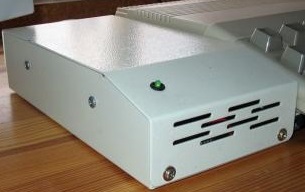 I opened it up and noticed the 2 SIMM memory sockets, which showed that my unit is manufactured by Off Limits, which uses SIMM memory, and not SIPP memory which is very rare and probably cannot be found today:

The original unit, with the SIPP memory socket, could have looked like this: 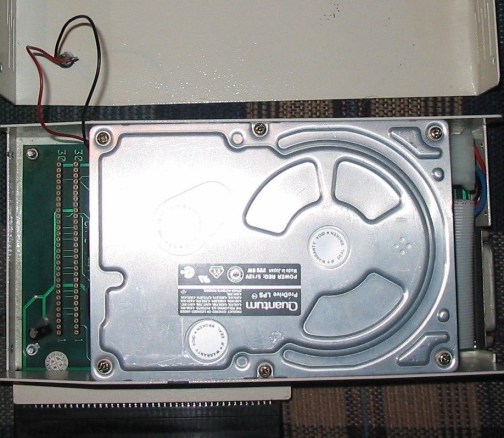 I proceeded to search my junk box for old SIMM memory, and sure enough, I found 2 pieces of 4MB 30-pin SIMM memory that fits into the socket. After a simple installation and reboot, my Amiga now reports 9MB of memory, that is 512KB chip RAM, 512KB from the trapdoor slot and 8MB which has just been installed:

With the maximum supported amount of memory (8MB) installed, I now needed to install the SCSI hard drive so that I no longer had to boot my Amiga 500 from floppy. As I do not have any working 3.5″ SCSI drive, I resorted to using the SCSI2SD converter by AmigaKit, which emulates a 3.5″ SCSI hard drive using an SD card:

This device is originally designed by codesrc, and all the associated firmwares, circuit diagrams, etc. are in the public domain. The documentation can be found here and the firmware source code can be found here. Take note that the SCSI2SD has an internal built-in active SCSI terminator, which should work by default with the Multi Evolution 500, but can be disabled by sending commands through a Windows application via the onboard micro-USB port, in case you want to connect other devices on the same SCSI bus.

With the SCSI drive physically installed, the next step is to partition it and install Workbench 1.3. Download the Evolution-30.dms listed under the Multi Evolution 2000 files (not the MultiEvo500-22.dms file which is listed under the Multi Evolution 500 files – I will explain why later) install disk from here and write it to a 720KB floppy disk. For this, you will probably need another Amiga and a tool to burn DMS images, for example this one. In my case, I used my other Amiga 600 for this task: Now boot from the created floppy and you will be presented with some German prompts. Just press J (German for Ja – Yes) to proceed: The tool should detect the SCSI drive and asks if you want to change the drive parameters. Press N twice (German for Nein – No) and it will reported that the installation has been succesful: At this stage a single partion containing the entire available space is created on the drive, which should be good enough for most purposes. If you want to create multiple partitions, you may need to use something like HDToolBox. If not, just reboot from a Workbench 1.3 boot disk and the system should detect that the SCSI drive has been installed and set up properly: If your Amiga hangs at the next reboot, checks to make sure that it is on Kickstart v1.3, and not Kickstart v1.2 (even though the specs say v1.2 is supported). Also make sure that you are using the Multi Evolution v3.0 setup disk, and not v2.2. If the v2.2 disk is used, you may encounter a “Software Error – Task Held” error message during partitioning, and will have to reboot your Amiga: It is worth mentioning here that the Multi Evolution startup code only reports that a SCSI drive has been installed if it has been partitioned properly; otherwise it will simply say “SCSI Read” or “SCSI Status”. The code will also try to enumerate the SCSI bus several times before giving up, most likely to cater for old hard disk drive which takes time to spin up and initialize. With the SCSI2SD all it takes is a single enumeration for it to be detected, but the algorithm is still there for backwards compatibility.

Once you are inside the Workbench desktop, right click the new hard drive partition (which should show something like DH0:????), and choose Initialize to format the disk, giving it a name like WB1.3. The process should take a while as it attempts to format the hard drive cylinder by cylinder: When formatting is completed, launch a Shell session, and copy all files from the Workbench 1.3 floppy over to the hard drive with the following command:

After that, type ENDCLI to close the shell session (there is no option to close it from the user interface!) and press Ctrl-Amiga-Amiga (the Amiga’s way of saying Ctrl-Alt-Del) to reboot and your Amiga should boot into Workbench from the hard drive: At this point the basic setup is completed. I also tried SysInfo and noted that the SCSI2SD is detected as evolution.device: 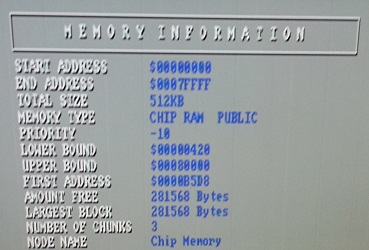 My final wish for this Amiga is to installed a Real Time Clock RTC module so that the computer can remember the time (something taken for granted nowadays) properly. The Amiga (and most vintage computers of the 80s) does not have the RTC installed by default. For this I found a junk Amiga A501 with 512KB RAM expansion and an onboard RTC module from eBay: 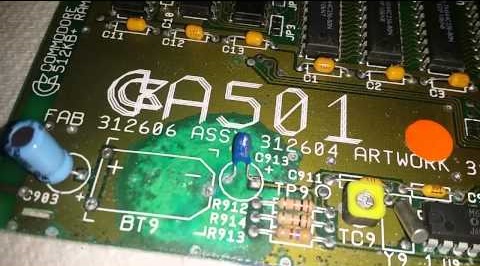 The 3.6V Ni-Cd battery to maintain the time leaked and had to be removed. I cleaned up the PCB and soldered in a new replacement battery, also purchased from eBay:

With this repair, I proceeded to remove the existing 512KB trapdoor memory module and install the A501. AmigaDOS now could detect the RTC upon startup, and showed the current time (after it has been set in Preferences, or from a shell session using the DATE command): Take note that the RTC will not run without a working battery installed, unlike modern computers whose RTCs can run from the motherboard power supply rails when power is on. If no RTC is detected, AmigaDOS will report “Battery Backed-up Clock Not Found”, and default the system clock to the timestamp of the floppy disk: 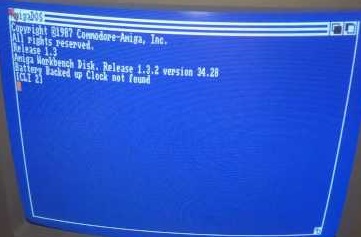 With 8MB of RAM, a 256MB SD card running using SCSI2SD, and a real-time clock, my Amiga 500 setup is completed. Next on my wishlist is to get this Amiga 500 on the Internet, perhaps by using a PPP server or by using plipbox, an Arduino-based parallel port Ethernet adapter for the Amiga. When I have the time to work on it, I will write the next article. Stay tuned!