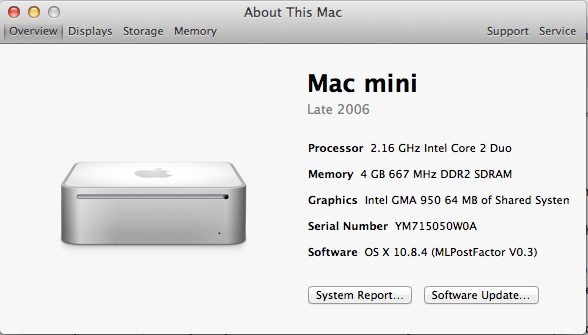 This tutorial shows you how to get Mac OS X 10.8.4 (Mountain Lion) running on a late-2006 Mac Mini (model A1176), which officially can only support up to Mac OS 10.6.8 (Snow Leopard), according to this Wikipedia article. Although I have not tested it myself, the same steps would probably work if you have an early-2006 Mac Mini.

Mac Mini 2006 comes with a Core Solo or a Duo Core processor, whereas Mac OS X Mountain Lion requires at least a Core 2 Duo, so you will need to upgrade the processor on your Mac Mini first before continuing. Although it is possible to patch the installer to run on a Core Duo, I would still recommend upgrading for a straightforward installation experience. Compatible processors can be found on eBay for as low as US$20 and available at a wide variety of speeds – 2GHz, 2.16GHz or 2.33GHz. A detailed step-by-step guide on how to upgrade the processor can be found here.

Optionally, to make the whole process worthwhile, it is also recommended to upgrade the RAM. Although the Mac Mini 2006 comes with the Macmini1,1 firmware which can only support up to 2GB of RAM and will not boot if more than 2GB is installed, you can install up to 4GB (2 pieces of 667MHz laptop DDR2 SDRAM) by updating the firmware to Macmini2,1, originally meant for the Mac Mini 2007 family. The steps are summarized below:

The machine can only use around 3.3 GB out of the total of 4GB that is recognized, due to limitations of the 32-bit processor. And while you are at it, take the time to upgrade the hard disk (a 2.5″ SATA drive) to an SSD, preferably 128GB or more. The final configuration, 2GHz Core 2 Duo with 4GB RAM and 128GB SSD, will make your Mac Mini 2006 machine performance more or less in line with the Mac Mini 2009, a much later model.

Before you proceed you will need to upgrade the OS on your Mac Mini to Snow Leopard 10.6.8, the last officially supported version. Next, get your Mountain Lion installer media ready – which can be a .DMG image or an actual DVD. After that, download MLPostfactor 0.3 from here, needed to patch the original Mountain Lion installer disk, which does not support the Mac Mini 2006, to run on your machine.

As at the time of writing this article (May 2015), MLPostfactor 0.3 only supports Mac OS up to 10.8.4. Versions 10.8.5 or above are not supported, so make sure that your installer is of the right version.

To make it easier to switch the boot partition without holding the Option key, you may also want to install a boot manager such as rEFIt.

Here comes the trick. The user interface for version 0.3 of MLPostfactor apparently only supports OS X Lion (10.7) and will refuse to run on 10.6. I tried to trick it by changing the system version number in /System/Library/CoreServices/SystemVersion.plist but things would still not work – MLPostfactor started but could not find Install OS X Mountain Lion.app in the Applications folder even though the installer was clearly there. A workaround would be to use MLPostfactor 0.2, which can run on Snow Leopard, to upgrade the system first to 10.7, and from there upgrade it to 10.8 by running MLPostfactor 0.3 again. I did not attempt this method because it seemed time consuming and most importantly, I had no installer disc for 10.7.

My relief came when I read this article which showed me how to use MLPostfactor from the command line. Apparently there is another MLPostfactor.app folder inside the original MLPostfactor app which can be invoked using the following command to patch the installer:

Surprisingly, there is no version check in the command line version of MLPostfactor and this method actually works to create the 10.8.4 installer partition. There are a few other commands that need to be done to patch the installer partition – refer to the original article for details.

A simpler way would be to use the MLPostfactor script written by pjherron available from github. With this script, the steps to upgrade to 10.8.4 from 10.6.8 on your Mac Mini can be summarized as below:

If the installation is successful, the About This Mac dialog should show something similar to below: 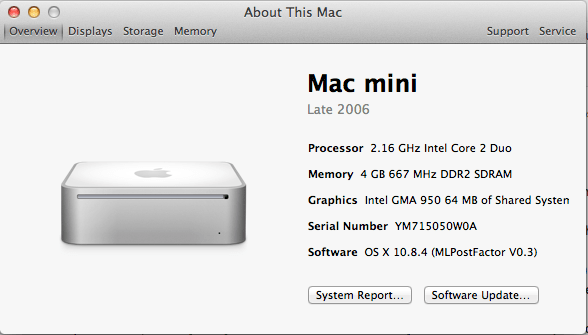 In my experiment, the final system runs fine without major issues. Application such as Firefox, Skype or even xCode and the iOS simulator could run well. VLC player works well to play normal DivX or Xvid videos. The only major application that is problematic is Dropbox, which couldn’t even install due to error ‘no mountable filesystems’ when mounting the installer DMG. Tuxera NTFS can install and appears to work but will later cause random kernel panic when browsing NTFS partitions in Finder. I had to resort to removing Tuxera and learn to live with read-only NTFS support for now.

If your dock in Finder appears to be transparent after the installation, open Terminal and run the following command to fix it:

Read here for other useful tips and tricks.

Other than the above issues, my installation of 10.8.4 on the Mac Mini is stable and serves me well as my daily work machine. My next attempt would be to install 10.9 (Mavericks) or 10.10 (Yosemite) on this computer. As far as I know, although there are proof-of-concept attempts, nobody has managed to get a stable working system yet, presumably due to challenges in getting graphics drivers to work properly.