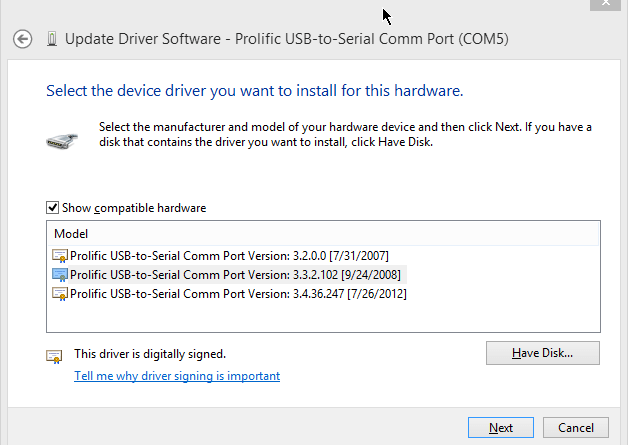 To avoid using the MAX232 level converter and a USB to serial adapter on my Mac Mini every time I needed to debug the PIC micro-controller via UART, I purchased a few USB to TTL modules from eBay, hoping that the PIC will simply appear as a serial port under Windows ready for use with any terminal program.

Although Windows 8 automatically installed the driver for the module, the installation was not successful with an error message “A device which does not exist was specified.” shown inside Device Manager. The module works fine on Windows XP or Windows 7 and my other USB to RS232 adapter works fine under Windows 8.

Further research reveals that the module is using the PL-2303HXA chipset, which is not supported under Windows 8, as indicated on the manufacturer’s driver download page:

What is so special about Windows 8 that prevents the PL-2303HXA/PL-2303X from working, while other variants in the PL2303 family work just fine? For all I know the only major difference is that Windows 8 requires the use of signed drivers, which is irrelevant since the Prolific driver is signed. In any case, the requirements of signed drivers on Windows 8 can be disabled by using the following BCDEDIT commands:

With some research I found a suggestion here. Apparently it is a driver problem that prevents the PL-2303HXA chipset from working on Windows 8, and not a chipset problem. The solution is to use an older driver file (not the driver installer provided by Prolific) downloadable from here and choose to install the driver manually.  When prompted, click “Browse my computer for driver software”, select the driver’s INF file, choose “Let me pick from a list of device drivers on my computer”, and select the Prolific driver version 3.3.2 which was created in 2008 (not the latest version): With this manual selection, the driver will be installed properly on Windows 8 and a new COM port will be added under the Ports (COM & LPT) section in Device Manager and can be used from any terminal program.

But the question remains as to what prevents the latest driver of PL-2303HXA from working on Windows 8. My guess is that there are some problems with the latest driver and this particular chipset on Windows 8 and although the problems might be fixable, Prolific has decided to take this opportunity to end-of-life some older PL2303 models and force end users to upgrade to newer models.